Do You Cave to Resistance or Use Your Authority to Insist Upon Change? 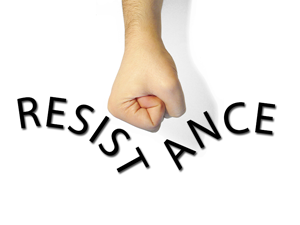 “What would a 33% increase in revenue mean to your business?” I asked the owner of a privately held small local business.”If your revenue went from $900K to $1.2 million per year, what would that mean to you personally?”

The owner’s eyes lit up as he told me he’d be able to increase the compensation for his long time outstanding employees; he’d be able to hire another person so his shop floor lead (and part owner) wouldn’t have to do so much physically demanding work; and he himself would be able to cut back on the hours he spends on site.

He barely finished this list when he looked at me and said “You’re hired. Let’s do it.”

“It” was a consulting engagement that would focus on meeting the $1.2 million objective within one year. I had many, many ideas about how to mine his CRM data, create new value options for customers and attract new customers—all without offering coupons or discounts. He had grown over 20+ years without these gimmicks and I didn’t see any reason for him to start now.

Just as we were about to have our first meeting, he sent a list of his concerns to two other people: the shop lead and a bookkeeper friend. He ended his list with the question “Is this worthwhile?” The next day he let me know that he’d changed his mind about working with me.

What happened? It turns out, not unsurprisingly, that the two other people were afraid. They looked at his list of concerns and concluded that they were insurmountable and therefore the project wasn’t worthwhile. So the owner changed his mind.

I’ve seen this happen so many times: people look at new, unfamiliar ideas and their first thought is “that’s not the way we do things.” From that they conclude that going ahead is a big risk that they are unwilling to take.

What should this owner have done? First, if he did want these two people to buy in, he should have told me and I would have invited them to one of our meetings so they could ask me questions directly.

Second, he should have asked me how to approach these two people. Although he told me that he wanted his shop lead in on our meetings about tactics for growth, which I agreed to without hesitation, he told me he would be making the decision to work with me himself. When he got cold feet, he turned to these people who were sure to support his hesitation.

There’s discussion ad nauseam about what makes a leader. What is the role of the owner or chief executive? The most successful executives and owners are those who set objectives and make the decisions that will lead the company to meet them. A leader doesn’t lay out their concerns about what could possibly go wrong and then ask others to support those worries. Of course they will!

This owner and his company have a huge number of opportunities hidden in plain sight. I have no doubt that the 33% revenue increase he would love is doable. Yet it will take doing things differently from the way they’ve always done things. So the owner decided not to lead but to follow the worries of his two loyalists.

How do you fulfill your role as an owner or executive? Do you rely on others who prefer the status quo to make your decisions for you, or do you set your objectives and make the hard decisions that will get your business to meet them? I have seen over and over that there are times when an owner or executive has to use his or her authority to override objections from those who are resistant. The end results will make believers out of even the most resistant people.

What are you going to do the next time big changes are required in order to achieve big growth? I hope you will choose to use your authority.