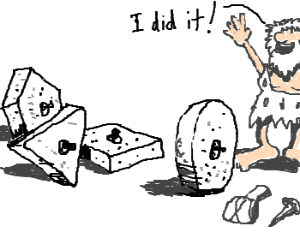 Airplanes, assembly-lines and telephones are examples of familiar objects that began as inventions, were then subject to innovations and that are constantly being improved.

Why are these difference important to you?

Inventions are crazy-difficult to create. They require huge resources, lots of time and the acceptance of high risk. This is what Apple faced when inventing the first smartphone. Apple was able to withstand the challenges. Unfortunately the realities of the modern marketplace mean that most companies are not.

Innovations make inventions better. I think Android phones are a great example of innovative additions based on the invention of the smartphone. Jet engines are innovations on the original invention of mechanical flying machines.

Improvements are the easiest to create and get to market and carry a lot less risk. Changes in size, resolution, battery strength and apps are great examples of improvements to smartphones.

When your company is formulating your strategy for growth, it’s necessary to know these differences and to incorporate into your strategy only the one or two that are possible given your specific situation.

If your strategy is to grow both revenues and profit margins, you likely need to innovate. Your window of opportunity for both higher revenues and higher profit margins is generally about the first 3 years. After that time you face downward pressure on your prices from competition who is seeking volume, not margins. You will then have to innovate again.

Improvements give you a shorter window for both growth and margins, perhaps 1 year. However, improvements that keep your company name in front of your market while you’re working on innovations can increase your revenue and reputation and prime your buyers for your next innovation.

Another kind of strategy, one driven by market needs, may lead you to invent. What does your market need that is non-obvious? Do you have the resources and tolerance for risk that make it possible to create a plan for this strategy?

The need for innovation and improvement is constant in modern businesses. Invention is perhaps less so because of the investment and high risk. When you’re seeking to grow both revenues and profit margins look carefully at both innovations and improvements and make a calculated decision about which to pursue.