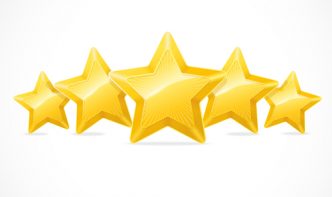 “The online reviews are killing me!” Marco exclaimed as I sat down with him. “We’re getting too many 3-star reviews. The comments are always about poor customer service, not about the quality of our remodeling work. It’s eating me up inside. We do great work, but people aren’t reading about that.”

I looked at the reviews with him. We could see the horizontal bar graph showing the longest bar was for 3 stars. Marco told me he wanted the 5-star bar to be the longest, by a lot.

During our discovery conversation, Marco told me about the time a few years back when they had a crisis caused by overspending. He never wanted that to happen again, so he was very frugal with the company’s money. One decision he’d made was that there would be no overhead on the payroll except for him and the accountant. All other employees had to do work that generated revenue, e.g. the remodeling crews.

“What happens when a client has a problem with some part of their project?” I asked. Marco said “We have a special number they call to leave a message. The next day someone on the crew listens to the messages and figures out how to respond.”

As Marco elaborated on this system, I realized that it doesn’t work for the benefit of the client. I said “Imagine being a homeowner living with the mess of construction. Something happens that you’re not happy about. You have to leave a message on machine and wait till the next day to get some sort of reply. Even if the ‘fix’ is helpful, the wait and your sense that no one is really in charge deeply colors your feelings about the company.”

Marco remained adamant that hiring one person dedicated to customer service would be a waste of money. Logic and reasoning weren’t going to change his mind. So, we did an exercise. We looked back at the past two dozen projects. We examined all the complaints, concerns and delays and calculated their costs. Marco was pretty upset by the high number.

We worked together to hire the perfect fit person and create some policies that improved customer service while carefully managing the company’s costs. Two months later Marco urged me to look at the online reviews. All the most recent clients gave them 5 stars! That bar graph was beginning to look a lot better in Marco’s eyes.

What beliefs might be holding you back from the success you want to see? How can you get a fresh perspective that would help you change those beliefs and lead to those successes?